The whole civilisation of to-day, even into the sphere of the most spiritual life, is founded on the egoism of humanity. In the first place, consider with an open mind that domain of spiritual life which receives men’s reverence to-day — the domain of religion. Ask yourselves if our present civilisation, particularly in the religious sphere, is not so constituted, as to appeal to man’s egoism. It is typical of all sermons and preaching of our time that the preacher tries to reach men through their egoism. Take for example that question which should concern people most deeply — the question of immortality. You will see how almost everything to-day, even in sermons and exhortations, is directed by the preachers to appeal to man’s egoism in the super-sensible sphere. Egoism impels man to cling to his own being as he passes through the gate of death, to preserve his Ego. This is a form of egoism, however refined. And to-day every religious denomination appeals largely to this egoism when treating of immortality. Hence official religion mostly forgets one end of our earthly existence in addressing man, and takes account only of the other. It fixes its gaze on death and forgets birth. Though these things may not be openly acknowledged, they are nevertheless underlying tendencies. We live in a time when this appeal to human egoism must be combated in every domain, if the life of mankind is not to decline further and further on its present downward course.

If a person looks back in a more unselfish way to what he has experienced in childhood, youth, etc. — according to the age he has reached — there emerges as if out of the gray depths of the spirit various persons who have had something to do with his life in all sorts of relationships.

Look back into your life and pay less attention to what interests you in your own respectable person and much more to those figures that have come into contact with you, educating you, befriending you, assisting you, perhaps also injuring you — often injuring you in a helpful way.

One thing will then become evident to you and that is how little reason a person really has to ascribe to himself what he has become. Often something important in us is due to the fact that one person or another came into contact with us at a certain age, and — perhaps, without knowing it himself, or perhaps, being fully aware of the fact — drew our attention to something or other. In a comprehensive sense, a really unselfishly conducted survey of our lives is made up of all sorts of things that do not give us occasion to immerse ourselves selfishly in our own being, to brood over ourselves egotistically, but lead us to broaden our views to include those figures who came into contact with us. Let us immerse ourselves with real love in what has come into our life. We shall often discover that what evoked an antipathy in us at a certain period is no longer so disagreeable to us when a sufficient length of time has passed because we begin to see an inner connection. The fact that we had to be affected in an unpleasant way at a certain time by one person or another might have been useful to us. We often gain more from the harm that a person does to us than from the furtherance afforded us by another. It would be advantageous to a person if he more frequently exercised such a survey of his life, and should permeate his life with the convictions flowing from his self observation. “How little occasion I really have to occupy myself with myself! How immeasurably richer my life becomes when I look back to all those who have entered my life!” In this way we free ourselves from ourselves when we carry out such an unselfish survey. We then escape from that terrible evil of our times, to which so many fall victims, of brooding over ourselves. It is so extremely necessary that we should free ourselves from this brooding over ourselves. Anyone who has once felt the power of such self-observation as I have just described will find himself far too uninteresting to spend much time brooding over his own life.

The time will come, and it may not be far off, that people will say: It is pathological for people to even think in terms of spirit and soul. ‘Sound’ people will speak of nothing but the body. It will be considered a sign of illness for anyone to arrive at the idea of any such thing as a spirit or a soul. People who think like that will be considered to be sick and — you can be quite sure of it — a medicine will be found for this. At Constantinople the spirit was made non-existent. The soul will be made non-existent with the aid of a drug. Taking a ‘sound point of view’, people will invent a vaccine to influence the organism as early as possible, preferably as soon as it is born, so that this human body never even gets the idea that there is a soul and a spirit.

The two philosophies of life will be in complete opposition. One movement will need to reflect how concepts and ideas may be developed to meet the reality of soul and spirit. The others, the heirs of modern materialism, will look for the vaccine to make the body ‘healthy’, that is, makes its constitution such that this body no longer talks of such rubbish as soul and spirit, but takes a ‘sound’ view of the forces which live in engines and in chemistry and let planets and suns arise from nebulae in the cosmos. Materialistic physicians will be asked to drive the souls out of humanity.

Now I come back to the question: Where are the earlier Initiates? For certainly it will be said that they are not to be found. But, my dear friends — I shall have to say something paradoxical here! — if it were possible for a number of human beings to be born today at the age of seventeen or eighteen, so that when they descended from the spiritual world they would in some way or other find and enter seventeen- or eighteen-year-old bodies, or if at least human beings could in some way be spared from going to school (as schools are constituted today), then you would find that those who were once Initiates would be able to appear in the human being of the present day. But just as little as it is possible, under the conditions obtaining on earth today, for an Initiate, when he needs bread, to nourish himself from a piece of ice, just as little is it possible for the wisdom of an older time to manifest directly, in the form that you would expect, in a body that has received education — in the present-day accepted sense of the word — up to his seventeenth or eighteenth year. Nowhere in the world is this possible; at all events, nowhere in the civilised world. We have here to take account of things that lie altogether beyond the outlook of the educated men of modern times.

When, as is the custom today, a child is obliged as early as the sixth or seventh year to learn to read and write, it is torture for the soul that wants to develop and unfold in accordance with its own nature. I can only repeat what I have already told you in my autobiography, that I owe the removal of many hindrances to the circumstance that when I was twelve years old I was still unable to write properly. For the capacity of being able to write, in the way that is demanded today, kills certain qualities in the human being.

It is necessary to say such a thing, paradoxical though it may sound, for it is the truth. There is no help for it — it is a fact. Hence it is that a highly evolved individual can be recognised in his reincarnation only if one looks at manifestations of human nature which are not directly apparent in a man, if he has gone through a modern education, but reveal themselves, so to speak, behind him. 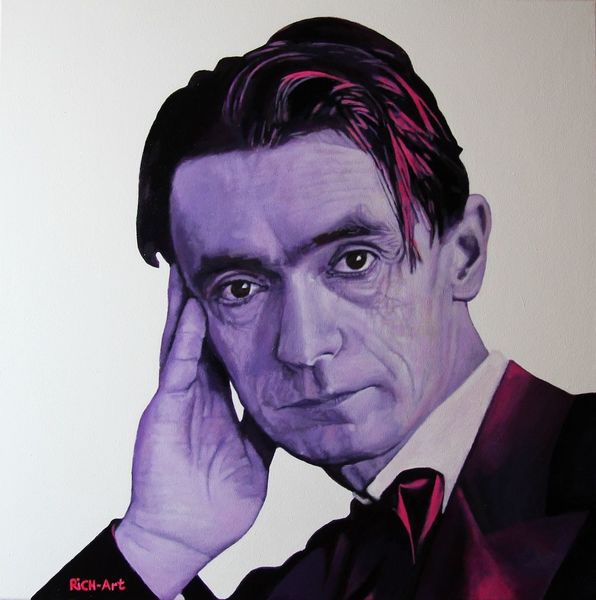 Let us learn to regard the mistakes of human beings as their own affair and the accomplishments of human beings as something that concerns all of humankind. People’s errors belong to their karma; their deeds concern humanity. Let us learn not to be troubled by people’s mistakes; they themselves must atone for them. Let us rather be thankful for their accomplishments, for the entire evolution of humanity lives from them.